Nelson’s earliest roads were made and maintained by hand, using men and teams of oxen — the same methods that cleared farms. Road layouts reflected that labor intensity. They tended to be built straight up and down hills rather than be bench cut, and they were likely to follow property lines and avoid using already cleared and productive farmland. However, early property deeds made it clear that all property was “subject to all necessary highways.” Between its founding and today, Nelson has laid out, built, relocated and improved several hundred roads.

In May 1834 the selectmen received a petition from a number of residents to layout a new road. A public meeting was held and the town approved the following road: “Beginning at the Stoddard line near the brook in said Nelson thence south 34 degrees west through land of James Clark 12 rods to a stake and stones. Thence south 12 degrees west 16 rods 9 links. Thence south 5 degrees west 20 rods 12 links to the bank of the brook. Thence south 40 degrees west across the brook to the old road near James Clark’s cider mill 6 rods. The above line is to be the center of the highway which is to be 3 rods wide.”

This road is part of the current Old Stoddard Road from the Stoddard town line to the big culvert that carries Bailey Brook.  The stone foundation visible on the north side of the road today is probably James Clark’s cider mill.

For construction purposes, road layouts were divided into lots. The town set up contracts for different lots of the new road, and they were put out to bid.

“Conditions of sale [contract to build] of a piece of road in Nelson near James Clark’s.  Lot number 1 is 12 rods to be made 20 feet wide from the center of ditches and 20 inches crowning and all the stone and roots to be taken out that will come within 15 inches of the top of the road and all necessary sluiceways to be put in where needed and covered with hemlock plank or stone the whole to be done in a thorough and workmanlike manner.” 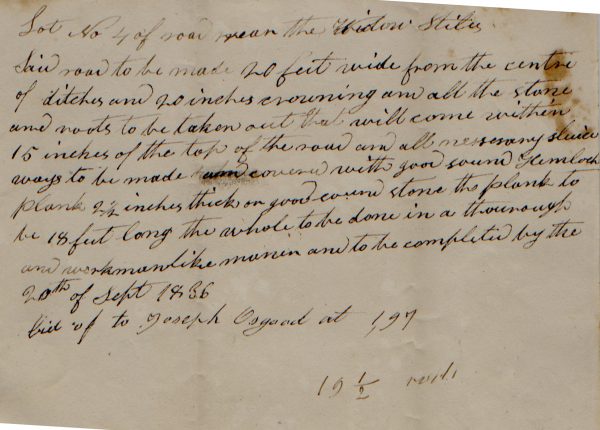 “Lot number 4 of a road near the Widow Stiles.  Said road to be made 20 feet wide from the center of the ditches and 20 inches crowning and all the stone and roots to be taken out that will come within 15 inches of the top of the road and all necessary sluiceways to be made and covered with good sound hemlock plank 2 ½ inches thick or good covered stone, the plank to be 18 feet long the whole to be done in a thorough and workmanlike manner and to be completed by the 20th of September, 1836.  Bid off to Joseph Osgood at $1.97 [per rod].  19 ½ rods.”

These records are the earliest records of formal road specifications. Twenty feet of width would allow the careful passage of two carriages. Provision was made for water management with crowning of 20” — particularly good for the steep hill sections and the specification of “sluiceways” [culverts] made of stone or thick hemlock planks.  At the prevailing, town-set rates for roadwork ($0.08 for a man and $0.06 for a team of oxen) we can estimate that Mr. Osgood needed about 12 hours to construct each rod (16.5 feet) of road.

Roads were mostly built and maintained by the people who lived nearby. The earliest records show the town meeting setting daily rates for work on the roads. A proprietor’s meeting in 1772 decided as follows: “Shareholders may work off their taxes on the roads.  Rates as follows: 2 shillings 6 pence per man per day; 2 shillings for a yoke of oxen; 1 shilling 6 pence for a plow; 1 shilling for a cart.” With cash to pay taxes scarce, and a need for roads, it was the only workable system.  Workdays were set at 9 hours. A pair of oxen was soon worth as much as a man. In fact as late as 1915 a man with a pair of oxen was paid twice what a man alone was paid for roadwork.

The town was divided into “highway districts” (as many as seventeen at one point) and a highway surveyor elected for each one.  Property taxes were levied separately to pay for town services like roads, schools and the minister’s salary. Highway taxes were turned over to the Highway Surveyors for collection. With the money collected or work done in lieu of highway taxes, the highway surveyor kept the roads in his district in repair. The following is a transcript of highway surveyor, Thaddeus Barker’s, warrant to collect the highway taxes and maintain the roads in his district:

“To Thaddeus Barker Surveyor of Highways in the Town of Nelson: In the name of the State of New Hampshire, you are required to warn the several persons in the above list [listed below] of Taxes, to work out the several sums annexed on the Road in Nelson aforesaid; beginning at the post guide by Doctor Goodell’s thence by Henry Wheeler’s, by Esek Phillips’ to the Roxbury line; thence by your own house to the Roxbury Line…. And you are to allow each man eight cents for each hour’s faithful labor and six cents for each hour’s work of a yoke of oxen and the common price for utensils…. J. Robbins, S. Griffin, N. Osgood, Selectmen

This district included Lead Mine Road and old roads leading south from “5 B Farm” to Roxbury near Woodward pond. 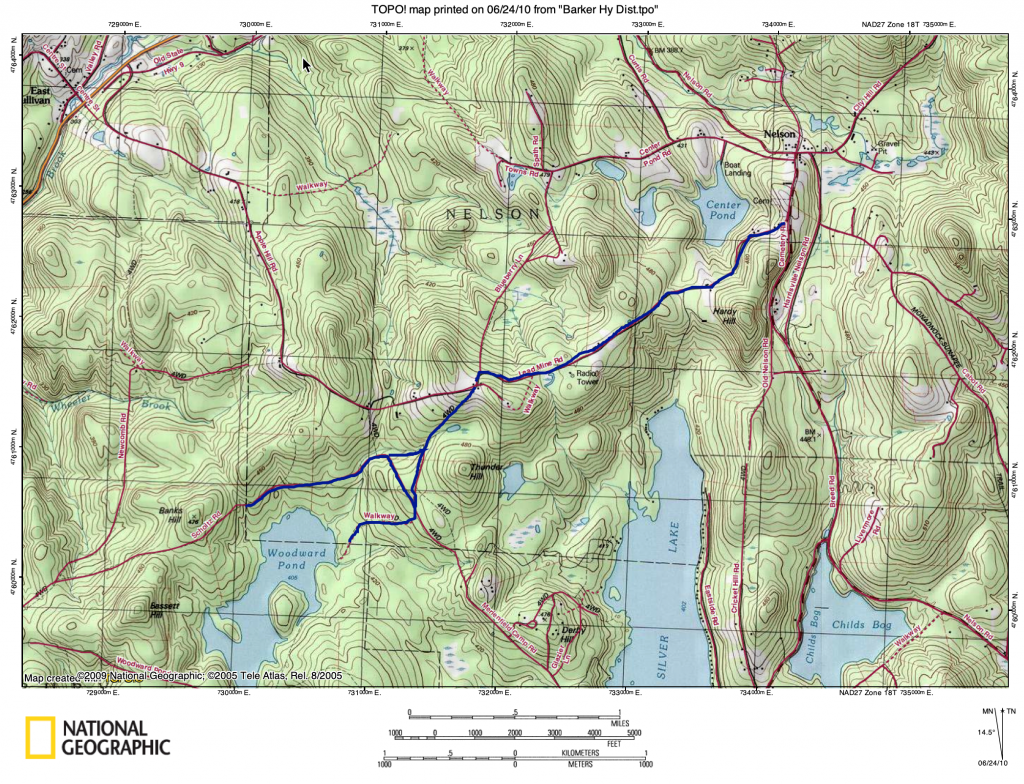 Barker was authorized to get the work or collect the taxes. Nelson records contain numerous small paper receipts taxpayers received for work done in lieu of taxes. A typical example:

The author is grateful to Sue Kingsbury for her skillful editing.