Towns granted by the Masonian Proprietors were required to build a meetinghouse for religious and public purposes. Therefore, called a “duty” meetinghouse, Monadnock #6 built a 25 x 30’ frame building that was 8 ½ feet high at the eaves. This was authorized at a proprietors meeting held at Breed Batchellor’s house in February of 1772. Anne Breed, daughter of Nathaniel and Ann Breed was the first person baptized in Monadnock Number Six meetinghouse in July 1773.   The Reverend Joseph Farrar of Dublin presided and preached the first sermon in Packersfield.

In 1782 the building was too small and a 45 x 60’ replacement was voted. It was erected beside the earlier one and was finished enough so the original could be sold and moved off site to be used for other purposes.  It was over 28’ high at the eaves. It must have been an imposing structure high on the hill and surrounded by as many as sixty horse houses.

This meetinghouse served the community for both civic and religious purposes until 1841 when the Orthodox Congregational Church and Society in Nelson bought 1 ¼ acres of land across the road from the Melville and Nims store in the new village center and built the current church. The building was disassembled in 1846. Much of the frame became the current Town Hall and the porches were moved to the village and used to construct the home of Charles H. Whitney (D-4-20). 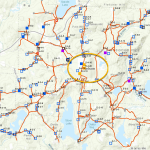 Editors note:  This is the third and final article in a series relating the founding of the first ministry in Packersfield.  The first detailed the many efforts to acquire a minister for a small, remote community. Several ministers came for trial periods and several offers of employment were made [...]

The original charter of Monadnock Number Six stipulated founding a successful town in accordance with the king’s requirements. The charter contained requirements to establish and support of religion and education. Three of the grantors’ shares in the town, a total of six one hundred acre lots, were reserved  “free [...]

A possible resemblance to a service in the Nelson Meetinghouse. The Second Meetinghouse was built in 1786 when the town, then called Packersfield, replaced its original Meetinghouse with a magnificent one modeled on one in Wilton. The town of Hancock, in turn, modeled their new meetinghouse on Packersfield’s. It [...]

In the early development of manufacturing, areas that afforded the potential for water power were prime locations for community growth. In 1814, the Cotton Factory was built in a remote section of Nelson to take advantage of the water power from the outflow of the dammed Factory Lake, now [...]