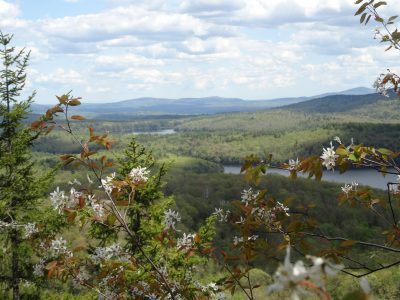 Serviceberry in bloom above Spoonwood Pond

Amelanchier arborea better known as shadbush or serviceberry, is among the first trees to bloom in Nelson each spring.  Tradition has it the name “serviceberry” comes from its association with burial practices in the early days. The blooming of serviceberry is supposed to mark the time when the frost has left the ground and graves may be dug. It was also the only flower available to mark those important occasions.  The end of life was marked with the renewal of life in the natural world.

Breed Batchellor’s first survey of Monadnock #6 set out ten acres in the center as common land. The purpose was to accommodate a meetinghouse where worship services, baptisms, marriages and funerals would be held. Some of the land around the meetinghouse was set aside as the graveyard.  The first meetinghouse was built in 1773 and the first marked burials in its graveyard, three years later.

Most died at home in those days and the preparation of the dead for burial was carried out at home, too. The announcement of a death was a signal for cessation of daily work throughout the neighborhood. Kindly assistance was at once given at the house of mourning. Women flocked to do the household work and to prepare the funeral feast. A gathering was held the night before the funeral, which featured plenty of food and drink.

Usually the woman of the house and her neighbors cleaned and prepared the deceased for burial and placed the body in a bed or in a coffin laid out in the best room in the house. In the days before embalming, candles placed around the corpse to mask the smell of decay. Townspeople came for a viewing and to pay their respects. A procession from the home to the burial ground followed. In the earliest days the coffin was placed on a bier draped with a black pall and carried to the cemetery by pallbearers. Older, respected men performed this task, though they were often assisted by a second or even third group of younger men for longer trips. In 1796 the town purchased its first hearse to make the journey less onerous.

From the very earliest days until well after the Civil War, Nelson had a practice of burying the dead at public expense. Included were coffins, grave digging, and transportation in the town hearse. It did not include monuments.  There are surely many unmarked graves in both of Nelson’s cemeteries and there are likely family plots near some of the clusters of family settlements in town.

The coffins were made of “sound, clear pine boards not less than one inch thick to be hung with brass butts and a brass knob on the lid and to be well painted.” They were supplied by local men who bid for the business each year at town meeting. Early on they were made for the occasion, but later the town purchased a number at a time of various sizes and stored them in the town hall. When needed they were lined with black cloth and delivered to the home of the deceased. If one of the right size was not available, the sexton was authorized to purchase a suitable one from William Briggs of Keene for $1.25. The 1862 inventory showed nineteen on hand at the town hall.

In 1853 Jonas Child agreed to furnish coffins made to this specification and deliver them to the home of the deceased and return with the hearse for the trip to the graveyard. All for $1.15

Jonas also dug the graves. They were four feet deep. Nelson had no receiving tomb where the dead could wait to be buried in the spring. Graves were dug at all seasons. For $1.25 he dug the graves, dipped the water from them, shoveled a path through the snow for mourners, covered the coffin with 1” solid planks and filed the graves “as soon as the mourners had left.” The following year the planks were specified to be hemlock and the thickness doubled. 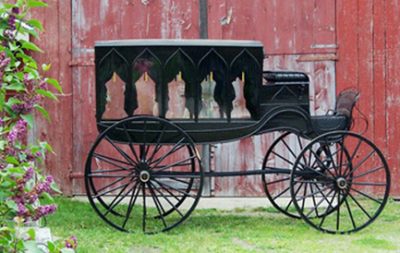 A hearse of this era.

The first hearse, from 1796, must have been a small affair, just a flat wagon painted black on which the coffin of the deceased could be carried. We know it was small; it was stored in a special house only eight by ten feet in size built on the old common. Nelson was to own at least four more, the last being purchased in 1878.  The original 8×10’ house was replaced by a 16×20’ one in 1815 to house a new hearse, likely bigger and more commodious than the first. There are records of several new hearses purchased after that date and the hearse house was frequently rebuilt.

The last hearse house was built on Center Pond Road in 1878 using wood from the older one. Josiah H. Melville offered land behind the Gerbis’ house today in exchange for the old pound across the road from his home. The last town hearse was acquired at the same time. The last record we have of the new hearse is in 1881 when J. H. Osgood was paid $24.54 for painting the hearse house and varnishing the hearse.

After the hearse house fell into disuse, it moved again to its current location where it serves as Bert Wingerson’s garage. It has the same 16’x20’ hand-hewn frame from 1815. When Bert arrived in Nelson, Win French showed her coffins stored above the town hall. They were fitted with isinglass windows so mourners could view the face of the deceased. Our old hearse house still lives, but the coffins have disappeared.

Religious beliefs often dictated the shape of the burial, but the idea of “waking the dead” has been practiced all over the world throughout history and was employed in early times in North America. It is partly where the tradition of holding viewings came from, as it was a time to watch the body to be sure the deceased was actually dead. There are stories of cases of bodies coming to after they were believed to have died, people who were most likely unconscious before we understood what that was.

Holding vigil with the body to be certain of death was common. Wakes stood apart from religious funerals as sometimes wild and unrestrained social gatherings that should be ‘fit to wake the dead.’ The other purpose of these events, was to imbue the dead spirit with life that they might continue on with their consciousness to whatever awaited them.