Dick Upton Remembers Life in Nelson in the Early 1900s

Dick Upton Remembers Life in Nelson in the Early 1900s

On this 3rd day of September 1992 with a temperature of 50 degrees and a gentle rain falling, I feel somewhat like the old gentleman who was sitting alone in the YMCA, afraid to go home in the dark.

As I look out the window, at the leaves already turning yellow, orange and red, I am wondering what the world will be like for my great grandchildren, and will they wonder what the world was like for me in the early 1900’s.

This is for the benefit of my grand-children and is a picture as I remember it.

All six of us were born at home without the aid of a doctor, depending on the assistance of a neighbor. 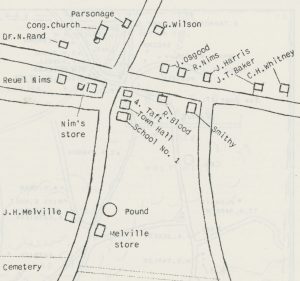 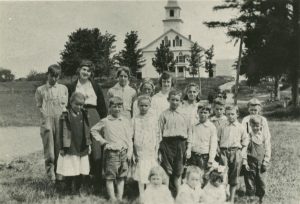 When I was ten months old the (R. Blood) house was moved to its present position south east of the brick building (School No. 1 on the map) where we all went to school. My two younger sisters Frances and Elizabeth, and my brother Roger were born in the same house after it was moved.

There was no electricity, only one telephone in town, no bathrooms, no central heat, no radio – no television. 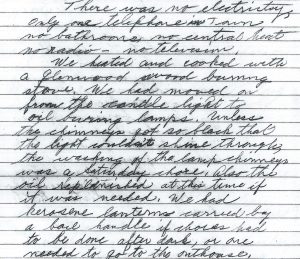 A few paragraphs taken from Dick Upton’s hand-written manuscript from which this post was typed.

We heated and cooked with a Glenwood wood-burning stove. We had moved on from the candle light to oil burning lamps. Unless the chimneys got so black that the light wouldn’t shine through, the washing of the lamp chimneys was a Saturday chore. Also, the oil was replenished at this time if it was needed. We had kerosene lanterns carried by a bail handle if chores had to be done after dark, or one needed to go to the outhouse.

The outhouse was sometimes in a corner of a shed as far from the main house as it could be, but many times it was at the end of the barn or carriage house. It had wooden seats of different heights to accommodate all ages. Fancy outhouses had a small window in the upper back and a moon in its first quarter cut in the door. The one in the white house we lived in first was in the corner of the shed with a cloth curtain instead of a door. There was no such thing as White Cloud or any tissue, old newspapers or Sears Roebuck catalog, even corn cobs, were used.

Few trips were made after dark and one didn’t stay long on a cold windy day unless someone parked in front of the door!

Each bed had its chamber vessel or potty. There were many kinds and sizes. Some were plain, some were highly decorated. To empty and clean these was an unwelcome chore!

I forgot to tell how the house was moved. Roy Forbes, my grandfather Orville and my father Horace with the assistance of Topsy, my grandfather’s horse, picked up the house, put rolls under it, turned it round and round up the road, and in seven hours [“hours” was inserted here as no word was included in Dick’s account] it was in its present position.

Dad dug a well sixty feet from the house and that was the only water we had. If the well went dry in the summer, we went to the brook with barrels and to the spring with pails for drinking water.

With winter, the pump had to be drained after each use or it would freeze. It also had to be primed again when you wanted to use it.

At first, water was heated in pots on top of the stove. Later a new stove with a hot water tank on the end, away from the fire box, was purchased.

Monday was wash day – water was carried from the well into the house, poured into a copper boiler, which was on the front over the fire box until it was boiling. Then with the clothes already in, it was moved to the side so more pans could heat water to add as needed. There were no soap powders, instead pieces of Fels Naptha were sliced off a bar. The clothes were stirred about with a wooden forked stick.

Two galvanized tubs were set up on a wooden bench, with a center piece high enough to hold a ringer, hand operated, so the water could drain back into its own top. With the forked stick the hot clothes were taken from the copper boiler, placed in the galvanized tub with hot water in it, where they were scrubbed on a scrubbing board, where more soap was rubbed on if needed.

Hanging clothes was no problem in the summer but they froze stiff before you could hang them in the winter.

After the clothes were dry they were taken from the line, folded and brought inside. There were no wrinkle free clothes in those days, so everything needed to be ironed.

Irons at first were solid and you had to wrap the handles with cloth so as not to burn your hand. Later they had a removable handle for four or six irons. Those were heated on the wood burning stove and there was always a hot iron and the cool one would be placed back on the stove top to reheat.

To go back to wash day for a minute; the hot water was saved to mop the floors, the rinse water was used to water the garden vegetables or flower gardens or even a lawn, if there was one.

We usually used all the land we could to get hay enough to feed the horses and cow.

People who could afford it had a driving horse and a pair of work horses, one or more cows, sheep, hens and pigs. 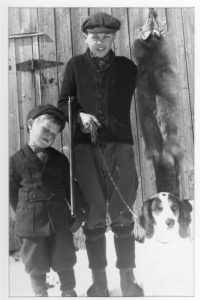 Brothers Roger Upton (Dave Upton’s father) and Dick Upton after a coon hunt. The furs were most likely sold for coon-skin coats.

Father had a pair of Morgan horses which he drove and also worked. We had one or more cows. The milk was strained into tin pans and stored on the pantry shelves sometimes three pans high with a narrow thin board between the pans. When the cream had risen to the top, in about three days it was skimmed off, put in a crock and when there was enough it was placed in a wooden churn with baffles in it and turned by hand until the solid was separated from the whey, salted to taste, placed into one- pound molds and that is how we got our butter. The whey was fed to the pig. The milk was used in cooking, to drink, fed to the veal calves or heifer calves if one was being raised as a replacement. If the milk soured, we had no refrigeration, it was fed to the hens from which we got our own eggs.

We didn’t always raise a pig but when we did we made our own bacon, salt pork, hams, pork roasts and chops, lard and hogs head cheese.

Some people had an ice house. My mother’s father James Ruffle had an ice house. He would cut the ice on Center Pond, put a layer of sawdust on the ground, stack the ice with about a foot of space around the outside and two feet on top which was filled with sawdust. He had, as others did, an ice box, double spaced with a metal tank on top under the cover in which to place the ice.

Somewhere we got an ice cream freezer, which would hold about a gallon of cream which could be flavored as one wished, then take a piece of ice, chop up into little pieces, mix in a little salt, pack it around the container which was in a small wooden barrel type with a handle that churned the cream until it was solid. Never a treat like it!