David Marshall is recorded as living near here on the 1773 settlement survey. He had built a pole house, cleared 8 acres and moved his family on the place. He was there as late as mid-1776 as his name occurs in the record of the road there. He may have built the house here after the cabin. That might date the house to 1774. Stephen Cobb bought the place in 1777. Almost immediately the couple’s two children aged one and two died within a week of each other. They are the first burials known in the village cemetery. Stephen and Rebecca went on to build a substantial farm and have a further nine children. Stephen died in Packersfield on 1814. Just before his death he sold the place to his son, Joseph who lived there until approximately 1845 when he sold the place to two men from Hancock “reserving the use and benefit of the said Joseph Cobb his heirs and assigns  1 acre of land and the buildings which are situated on said 1 acre of land so long as said buildings stand.” Joseph died in 1851. 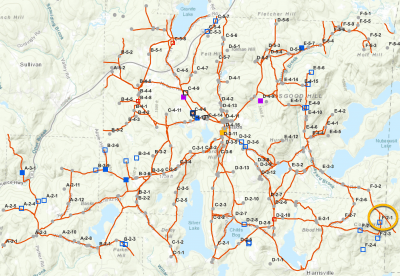