Daniel Town bought the land here in 1790 and built a large house. It sits on a knoll and must have had beautiful views into Vermont to the west. He lived and farmed here until 1827 when James Phillips bought it. Phillips, an early settler of Packersfield (1773), moved here from A-2-16. Phillips was the brother of Richard and Gideon all of whom moved to Packersfield from Rutland, Massachusetts after service in the Revolution. In 1831 Phillips sold to Herman Wheeler who was here 4 years before the 36-year tenure of the Nims family began. Henry Nims bought the place in1835 when he was forty. He lived here until he sold (1859) to his son, Lucius, who died there in 1871. His estate sold it to David and Lafayette Nims and they sold it two years later to James Smith who lived there until 1887. Charles Buckminster was next from 1887 to 1907 and Damon Marcus was the last resident until sometime after 1910. 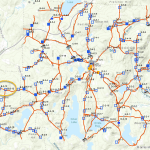