Part of the large Holt family from Andover, Massachusetts, Daniel bought this place in 1786 and moved here with his wife Alice. He was a cordwainer by trade. They moved to Packersfield with at least three of their children. They sold the northern half the lot to their oldest son, Thomas (E-5-6), who built there also. Daniel, Alice and two of their daughters followed Thomas and his family to New York in 1808. He sold to John Osgood who was acquiring land on Prospect Hill – later Osgood Hill. The home was abandoned then. 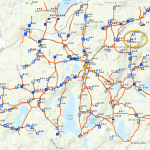