Listen carefully, these are the symptoms: increased heartbeat, memory loss, neuromuscular discoordination, heightened respiration, profuse sweating, confusion and fatigue.  Are we speaking of the latest Big Disease sweeping the Nation? Hardly. The above symptoms are exhibited by all greenhorns, newcomers and beginners at a Nelson Contra Dance. I speak from recent experience. 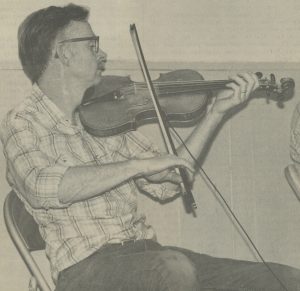 It’s 8:30 pm, a Monday night. You top the rise and come into Nelson Village; there are cars parked everywhere. You scan the plates: NH, MA, CO, PA, DE, NY, CT, VT, Quebec. The summer people and the local folks have come together this night to do-si-do.

As you walk up to the town hall, you notice a dozen people standing or sitting on the grass in front. You walk into the dance and discover why. A wave of heat as thick as a bale of old army blankets engulfs you. The couple from Apple Hill Chamber Players who have preceded you, turn to one another and gasp in harmony: “Oh My God!”

To recover from the heat, you edge over to one of the benches that line the walls and take a seat. The place is a madhouse. Wall-to-wall people are swaying and sashaying, reeling, kicking and cavorting, moving in long lines inward and outward like gigantic bellows, twirling by twos, North by South; advancing by fours from the West to the East. Nothing sedate about this crowd at all.

Finally, a break comes in the action. Caller Mary DesRosiers ends the song and the musicians get a rousing applause from the floor. You go up and introduce yourself to the man on piano, Gordon Peery. You shoot the breeze a while. A musician since age 5, he remembers enduring the pain of childhood piano lessons. “My mother was a pianist, that’s where the incentive came from origninlly. But it was about seven years ago, working at the Folkway, in Peterborough, that I became exposed to contra dance music and got the desire to teach myself how to play it.”

Today Gordon works for Robotics Age Magazine in Peterborough. Originally a Connecticut Yankee, he lives in Nelson and has been in the Monadnock Region for over ten years. “In fact,” he says, “I’m the sole musician to have lasted from the very first of the Monday night dances.”

A new caller, Peter Temple, steps up on stage and shouts to get the chattering crowd’s attention. Then he calls out a walk-through for everyone to familiarize themselves with these particular new steps before the music begins. This is standard practice for each figure of dance, unless the caller feels everyone is an experienced hand. There is some confusion as the fiddles glide into the Ladies’ Walpole Reel, but within moments everything falls into place, the experienced hands nudging, pushing and propelling the sweating and perplexed novices into the next series of steps.

Peter Temple is doing a stand-in tonight. While being the founding father of the Monday Night Dances, family concerns have gradually taken precedent and he has turned over calling duties to Mary DesRosiers and Ken Wilson, who have evolved to become experienced, sought after callers in their own right. An energy and engineering consultant, Peter lives in Harrisville with his family and has been a contra dance caller for nearly ten years. “I come from the Northhampton, Massachusetts area and had a band there, Sheehan’s Reel. I played concertina and hammer dulcimer and we had callers who would sit in with us. At some point I decided I might as well learn to call, as play music…so, I began calling with the band.”

The Ladies’ Walpole Reel comes to an end and the band is given another hardy round of applause. The crowd on the floor thins, heading for the exits. You’ve just danced yourself into a beginner’s delirium and you join them. Amazing how cool it is outside. Equally amazing, the voraciousness of the rural mosquitos, big as helicopters, as they land to dine on you and friends.  You grin and bear it for the cool relief of the sweet night air.

Back in the hall Gordon Peery has stood to announce the coming of the Chicago Barn Dance Association. On tour of the country, they’ll land in this neck of the woods in late August.  “And if we use some of our dance revenue to pay their fee, they’ll be here to play for us…so what’s the feeling about that?” The crowd cheers its assent and the issue is settled. In later conversation Gordon points out previous contributions to the Monday Night Dance monies.  “While we payed rent on Clark Hall in Harrisville, we saw fit to contribute $150 toward shoring up the floors there. That, and two other occasions come to mind. Not many people are aware of that.”

The band changes complexion.  Steve Woodruff relinquishes the piano to Gordon, who’s been side-lighting on guitar; Kendall Kardt packs up his guitar for the night and is replaced by Jason Little on mandolin; Peter O’Brien stows his ebony accordion and reaches for his silver flute;  and Betsy Taylor puts away her fiddle to dance, and is replaced by Harvey Tolman.

The music gets better and better. Ken Wilson mounts the stage to take over calling. He yells out a walk-through to a complicated contra series. He has to be loud, this is a big mob tonight. Harvey tunes up his fiddle then rips off into a spirited rendition of Lady Glenorchy, a Scottish tune. The dancing resumes with vigor.

Harvey Tolman (seen fiddling away here) has been playing for over 25 years. His family is legendary to the region, with roots in Nelson dating back prior to the revolution. He recalls that his father and grandfather played in fife and drum bands in their time, while his uncle, Newton F. Tolman, is as renowned for his flute playing as for his writing, and even authored a book on the very subject of New England Square Dance Music: Quick Tunes and Good Times. The Monday Night Dances date back six years. Harvey explains their origin. “Peter Temple and a few others were looking for a place where beginners could learn the contra dance styles and where novice musicians could get used to playing to an audience without the pressures of a big dance. They started in Clark Hall in Harrisville…there were only six people going to dance that first year, it was very informal.”

Gordon Peery interjects: “They’ve become very popular, moving to Nelson from Harrisville a little over a year ago. Sometimes it really gets hopping around here, but we’ve evolved the rule, and we’ve stuck to it, that at 10:30 we end it. It’s worked out well, though often the temptation is to keep on going.”

The temptation is no different this night. The tune ends, people reach beneath the benches for their water jugs, take a pull or two and wander outdoors for a breather. But the witching hour has come, there will be no more spritely jigs this evening. The final dance of the night is the traditional piano waltz. Breathless couples circle the hall in warm embrace as the night winds down to a close. When it’s done the musicians are treated to a deafening applause. Gordon leans over from his piano and says: “These Monday nights are always lively, but this one was outrageous!”

* The remaining photos by Byron O’Brien in this article were not reproducible.