Connected to the World by a Thin Wire

Connected to the World by a Thin Wire

When the electricity goes, it takes the world with it. The incessant hum of incoming information from telephones, e-mail and CNN falls eerily silent, and we are cut off from events on other continents, in other towns, even down the road. We have no idea what’s happening in the next town, never mind in Iraq or Bosnia.

When the world is gone, the elements come rushing in to take its place. The wind and the cold, the ice and the dark, immediately begin creeping back in to repossess our houses, our beds and our bones.

Instead of laying out welcoming mats of soft orange light on the snow, windows are blind sockets. Houses now seem to collect darkness. Inside, people become shadows moving in and out of the little igloo of light that a candle affords. The barriers between “inside” and “outside” are suddenly thinner than we realized, easily breached by nature. Without power, our domestic fortresses might as well be shoe boxes. A falling branch, not even a big branch, can cut through shingles, tar paper, plywood, insulation and sheet rock, and bring into the kitchen the January rain, pinging off the chrome of your now useless appliances.

As we revive primitive technologies – fires, candles, body heat – and huddle together in the little zones of warmth and light that they throw off, the world comes back to us again, in the old-fashioned way, by word of mouth. In between stoking the fire, procuring generators, lugging buckets of snow to melt and flush the toilet, and chain sawing our way out to the store to buy more kerosene, there’s nothing to do but tell stories.

Sitting by the fire with her knees too hot and her back too cold, my grandmother told a story about the great hurricane of 1938. It had rained for days and days, softening the ground and weakening the roots of trees, and the wind started. In contrast to the noisy artillery of the ice storm of 1998, the wind was howling so loudly that the trees fell over without making sound. It must have seemed like a mass suicide, great pines and oaks falling on their swords without uttering a sound.

At that time, my grandparents had a guest staying with them who was affiliated with the film industry. He was waiting for the storm to let up, and then he was on his way to Hollywood. He had washed out his underwear by hand, and hung it up on the low branches of an old apple tree in back of their house. As they were standing at their windows to watch the storm, the same way we stood watching at our windows sixty years later, they saw the apple tree go tumbling by, end over end, down the hill, taking his clean underwear with it. They all burst out laughing, but the wind drowned them out, like characters in a silent movie, which made it seem funnier still.

The ice storm was anything but silent. The drama unfolding in the front yard sounded like a battle zone. Every few seconds, cannon shots rang out from the hillsides as branches cracked and crashed under the weight of the ice. When a whole tree went down, it sounded like the launching of a great ship. First a loud explosion, then a creaking and groaning, grinding and twisting of wood. With a crash the ship was launched, and the ice sliding down the hill sounded like the ocean parting to receive it. 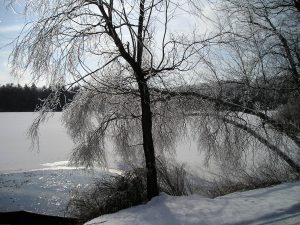 When the clouds parted for the first time in a week, the moon was full. The birch trees looked like croquet wickets. The apple trees were crystal chandeliers.

Perhaps it is fitting that the ice storm happened close to Civil Rights Day. It was Rev. Martin Luther King who spoke of the “inextricable web of mutuality” that binds us together. That web is partly what those wires and poles represent. The ice storm reminded us that under our temporarily protective technologies, we are the same small, naked creatures that went scampering after mastodons in our bare feet. We still need each other.