Note:  As we continue to celebrate Nelson’s 250th anniversary, we thought it’d be fun to go back 50 years to get a glimpse of Nelson’s 200th birthday party as written by Lael Wertenbaker. A “witty and interesting article,” although probably not 100% factual! Thanks to WKNE for giving us permission to print this. 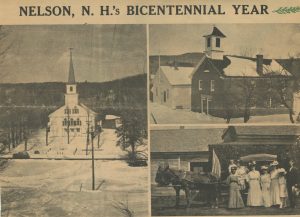 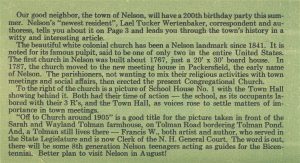 Nelson, New Hampshire, is about to celebrate its two hundredth year of identity as a town. I am its newest resident, or perhaps I should say householder since our correspondent is by no means speaking from the cradle. Having attended my first Old Home Day, Town Meeting and snow shoe picnic across the pond (elsewhere known as a lake?) I am preparing to join in celebrating our Bicentennial this summer, and it’s great. 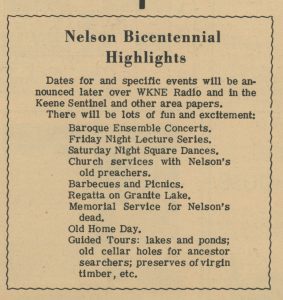 Like any instant neo-native or recent convert, I am given to indiscriminate delight, remarking on the obvious and wholesale credulity of which born natives take full advantage. Never mind, Nelson is now My Town, too

It is a sweetheart of a place, with one of those village-green and white-church-spire centers – credit New Englanders with sticking those white spires against the particular blue of this sky, it works every time – situated sort of somewhere between Peterborough and Keene, north of Monadnock mountain. If you try to explain where you live to anyone outside the region, confusion reigns at once, but if you don’t explain nobody can find you. There’s a local post office, to be sure, in an unofficial community named Munsonville which is actually within Nelson. If you address a letter to Nelson it goes to Munsonville and is stamped: Please Inform Your Correspondent that you do NOT live here. A letter addressed to Munsonville, NH U.S.A., arrives all right, but you have to go to Mr. Martin’s store, the only store in Nelson, which is in Munsonville, to get it. Otherwise, of course, we receive our mail courtesy of Rural Delivery, Marlborough, quite a piece down the road. The mail service properly coded, is superb. Not snow nor ice nor deep thick gumbo mud – which reminds me of my life in Louisiana before Huey Long came along with blacktopped everything – saves our postman Al from the completion of his appointed rounds. He should get a medal. As for the telephone, though, Nelson is NO Place. My exchange is Harrisville and it costs me a dime extra to call my friends on the other side of Nelson whose exchange is Sullivan. If somebody has all this perfectly straight they can reach me that is, if my eight-party line isn’t busy. The telephone operators who operate out of Keene are perfectly charming and it’s nice to have human contact again after a decade of dialing. Our long-distance ladies are wonderful and can find anyone for you anywhere in the world, but they don’t know about Nelson. They tell anyone who claims I live here that Nelson is a myth, maybe like Camelot, and that’s that. Knowledge of local geography and their own directory would save them time as well as improving the service. It would take less trouble to look under BOTH Harrisville and Sullivan for us Nelsonites than to persuade people we don’t exist.

Actually confusion is as native to Nelson as the Tolman family, who produced mostly males who married girls from a lot of places (there are nine Mrs. Tolmans around right now) or the Guillow family who produced mostly females who married a lot of other names but are still known to us natives as the Guillows. Nobody is even sure when the town became a town, which was in any case named Packersfiled to start with. In order to hold a Bicentennial, you have to settle the matter. Our committee picked 1767 over and against 1766 or 1774. 1766 was the year when we stopped being merely a tract of slopes designated as Moandnock No. 6 and became a settlement, but in 1767 our first baby, Betsy Batchelder, was born. As latest citizen I approve the choice. What better occasion from which to date a community? Things settle down when babies get born.

“Breed Batchelder, Gentleman,” Betsy’s father, along with some other settlers surveyed the town limits in 1768 – losing a man in the wilderness while they were trying to tame it by measuring it – and in 1774 we were actually incorporated, by the grace of God and George the Third, as Packersfield. One Colonel Packer had promised to give the fledgling town a whole lot of his land if they would immortalize him by naming it for him, which they did, but he didn’t abide by his promise. That was when the agitation to change the name started in 1774. However the men of Packersfield did not get around to this for a while. They were too busy fighting bears, wolves, wildcats and the native soil – which was so unbelievably unsuited to farming that why anyone ever tried it, let alone succeeded, is a major mystery. Then came the Revolution and they went off in proud numbers to fight the British. Our only Tory was chased away and his land divided among the patriots. Packersfield was such a hot bed of fighting men that after we got our national independence some heroes from other towns as well as our own settled in Packersfield and founded local dynasties, notably Ebenezer Tolman and Noah Hardy.

If you talk about your two hundredth, most of the emphasis goes back those two centuries to the beginning. Nelson’s pioneers were rugged people. They had to be. Foolish, perhaps, to pick out such impossible terrain to lick, like choosing to oppose your weight in wildcats, but stalwart. This ruggedness was accompanied by a kind of Renaissance quality known as Yankee ingenuity. You couldn’t really get sufficient sustenance from subsistence farming around here to do much besides degenerate but that is not what happened. During the fifty years Nelson was becoming an agrarian center, with stone walls hiking up one mountain and down another to mark off fields denuded of those stones, almost everybody turned his hand to something else. Small, side or home industries included a spoon factory for making spoons out of trees that grew abundantly near a pond named Spoonwood, a local lead mine and brick building from clay banks, from which bricks those rosy old houses in what is now Harrisville were constructed. The settlers also did woodworking, tanned hides, raised cattle and grazed sheep. In 1814, incidentally, federalists to a man and indignant over the embargo, they renamed the town at long last, for Lord Nelson, the British hero. 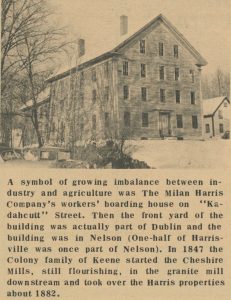 Nelson reached its peak population of over 1,000 before the Civil War, when it still included half of what is now Harrisville and all of Roxbury and Sullivan. There were ten district schools within its area and even an Academy or private high school for somewhat higher education. Migration to the west where farming made more sense diminished the population, however, and then in 1870 Harrisville broke away, cutting the population by half at a blow. It wasn’t until around 1900 that summer visitors began to make up to some extent for the drain on year-rounders. 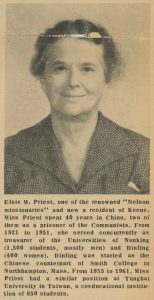 The old town had a reputation for piety which may be exaggerated because of the number of ministers who lived here at one time or another. In 1810 the regular churchgoing population was 135 out of nearly a thousand, but it wasn’t easy to get in to the church from round and about. Anyway, we sent our first missionary forth in 1830, when Ursula Sophia Newell, daughter of Nelson’s Congregationalist pastor, went with her husband by way of Cape Horn to Honolulu. In 1845 Dauphin William Osgood went to Foochow, China, as a medical missionary. In the twentieth century, our Bessie Hardy Lyman was in Turkey while our Elsie Priest served in China until as late as 1951. For a town this size that’s quite a record, but when one citizen felt the missionary zeal was being overemphasized he rose at a Nelson meeting and protested. Those of his ancestors who were practicing atheists, he said, displayed just as much courage as anyone who went off to convert the heathen. Or that’s what they say he said. You can get an argument going over anything in Nelson.

Now, after two World Wars and the escalating urbanization of the U.S., which has affected everything and everywhere in the country, what is two-hundred-year-old Nelson like? Easier to say what it isn’t like. It is not a neatly restored little show place with sparkling white houses that appeal to the rich and retired, although it has a couple of freshly painted white houses. It is not a resort, although the population increases by two thirds in the summer with non-residents who vote elsewhere, but it never seems much bigger except maybe right around Granite and Nubanusit lakes. It is not agrarian and it is not a bedroom town for nearby Keene although there are those who live here and work in Keene. Artsy-craftsy it is not, although several writers and artists live in it. Despite a decline in permanent population, it has some rich people, some poor, most middling; it includes the elderly, middle-aged and kids in pretty good proportion. So it’s a town, alive and very much its special self.

In a way it is true to its inheritance. A good many adult inhabitants do at least a couple of things in order to stay here. Our Town Moderator, for instance, is Clerk of the House of the New Hampshire Legislature in season, guides hunters in the fall, is a part-time working artist and a part-time innkeeper. His brother guides, boards dogs, some of which his wife trains as hunters when she isn’t painting or teaching painting, and earns the bulk of his living as a columnist, essayist and biographer. (He’s given up ski instructing and building houses but he still plays a peachy flute in square dance ensembles.) Their cousin teaches history in a nearby college, while lumbering his land, among other strenuous enterprises, and one man, a retired professor, is the most expert repairer of antique furniture north of the Metropolitan Museum. It’s like that.

You can’t get in, though, just because you, too, are a jack of several trades, like me. In spite of certain economic pinches, practically nobody who owns land in the area of Nelson likes to part with it. They are all land misers. I lucked in. You see, I just happened to be looking about in the Monadnock region for a bit of property on which to build a hut so I could get out of New York City and write a lot more books. I just happened to have a friend in Nelson, a colleague from journalism days, Helen Milbank, and she said you should live here where I do and I said where’s that? I didn’t know Nelson then from the statue in Trafalgar Square. We looked about, but no soap. Then I met Newt Tolman, whose ardent literary fan I already was, and conned him into parting with a smidgen of overgrown earth – once wilderness, then farm, now back to forest again – up a mountain known as City Hill. He only asked one question after he decided he might let me have it: “Are you dirt or hardtop?” I said, “Dirt.” (So now I can’t get down the hill at all in mud season.)

That is the key question if you ever get the same chance. Don’t say dirt to a hard-topper or vice versa.

Even if you never think of trying to live here, I along with the other 400 odd permanent citizens cordially invite you to come to Nelson’s birthday party. It will be going on all summer.