Established by Francis S. Bryant shortly after their father, Amos, bought the property from the widow of Stephen Beard in 1805. Little remains of the vats and other hallmarks of a tannery today. There is substantial retaining wall and corner that was probably the foundation of one of the tannery buildings. Wooden pipes used to bring water in from the brook to support the tanning operations were discovered at the base of these walls. They are referenced in a deed in which Amos Bryant sold his son, Francis, the tannery and the farmhouse behind it (E-3-13):

“Containing by estimate 1 –1/2 acres with the privilege of the water that now runs through said land by its running in logs under ground from the head of the brook that now runs through said land and the privilege of the lane to the farm house from the road.” Cheshire County Registry of Deeds Book 69, page 259 dated April 14, 1812

In 1832 two of Francis and Betsey’s children died of dysentery and they suffered the tragic loss of their two-year old son who fell into a vat and drowned.  Francis Bryant may have operated the tannery a bit longer, but he sold it in  September 1833 and moved west.  The property was purchased by Thomas Baker and, then by George Tolman. Those men may have carried on the business, but it is more likely that the operations ceased with the sale. 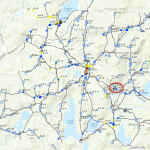 B-5-6 Mill Headquarters: This structure was built in 1855 likely as the mill office and crew quarters for the steam powered sawmill 100 yards to its east at B-5-7.

B-5-7. Three foundations in the far northwestern corner of Nelson are the remains of a steam powered sawmill that operated between 1855 and 1860. The complex is composed of the mill site itself and two supporting buildings that have in-ground foundations.

C-4-9 Stephen Harrington established his tannery in about 1803. He probably built this water powered bark mill at about the same time. The bark mill consisted of a dam and a mill where oak and hemlock bark were ground to produce tannin rich “powder” for use in the tanning process.

C-4-8 - Stephen Harrington established his tannery in about 1803. The tannery is located just east of Henderson Road on a small brook that served as both its water supply and its waste removal system. Water from the brook was collected above the road and carried by aqueduct across the road to the tannery below.

Asa Beard was a founder of the Nelson Cotton and Woolen Company in about 1815. While living at D-3-3, he built this house as his new residence and began building a factory at the outlet of Fish Pond (Granite Lake).

C-1-3: The outlet of Pleasant Pond (later Beed Pond and Silver Lake) was the site of three mills. The town’s first gristmill was established here in about 1771 by Daniel Wood of Upton, Massachusetts.

Established by Francis S. Bryant shortly after their father, Amos, bought the property from the widow of Stephen Beard in 1805. Little remains of the vats and other hallmarks of a tannery today.

E-2-6 In 1856 Joel Bancroft sold 85 acres here to Appleton Parmenter. The site included a good mill site just downstream from the Bancroft sawmill.  Parmenter built a saw and grist mill here. In 1864 he sold the mill to his brother, Isaac, from Brooklyn, New York.  Sometime later [...]

E-2-5 As early as 1830 Joel Bancroft built a sawmill at the outlet of the Great Meadow.  The elaborate foundation including a dry-stone arch and mill raceways can still be seen today.  In the late 1850’s the mill had been sold to the Sheldon and Tolman Clothes and Rolling [...]

D-4-13 Fulling Mill: Little remains at this site today but as flattened area north of the brook. Here in 1794, Thomas K. Breed built a fulling mill* with a shear. Fulling mils were used to treat woolen cloth woven on home looms to finish it. He bought land on [...]

D-4-3: Thomas was the 3rd son of Nathaniel and Ann Breed born in Sudbury, Massachusetts in 1761. He came to Monadnock #6 with his parents in 1768. After leaving home, he established himself at D-3-11 where he may have operated a small tavern and inn. He lived here while [...]

C-5-10 The mill site is the lowest of three on the stream that empties Granite Lake. The broken grindstone near the mill’s tailrace is evidence of its early use for grinding grain into flour.  Joseph Baker likely built the mill in the 1790’s as a saw and gristmill. By [...]

D-4-22 The Wilson Mill: Situated at the outlet of White Pond today is a very large stone dam, a ruined concrete gate and spillway and numerous stone piers that held the structures of the mills here from 1796 to the end of the 19th century.

Center Pond House & Mill Development Upper left:  French Farm. To the right, Nelson Village. Breed Batchellor was Nelson’s first settler and its developer. In the early days, he owned thousands of acres in the town. He built a small sawmill [...]

D-4-9 The Osgood graphite veins were discovered in 1848 and property owner Horatio Osgood leased them to Moses Carleton of Lancaster, Massachusetts. Two years later, Carlleton sublet them to J. and J. Seabury, a New York mining company; Jacob Seabury also bought the Town Farm Mine in 1858.

In 1851 brothers Silas, Edward, and Payson French leased mining rights on the Newell property from Oliver and Gad Newell. But the veins were narrow and short, and the deposit was probably worked out by 1855.

C-3-17 This graphite deposit was discovered in 1853 on what was then the 156-acre Nelson Town Farm, and the selectmen were quickly authorized to sell the mining rights. The S. C. Griffin Company had a lease on the graphite veins as early as 1855; Parke Struthers (1968) reported that [...]

B-4-7: This site is popularly called “Taylor Mill” because Frederick Taylor was its last operator from 1841 until well past the Civil War. When Monadnock #6 was settled, there were a number of small mills built on small but reliable brooks to furnish early settlers with the means of grinding their grain into flour and sawing lumber into boards to build the early homes. More specialized mills followed. Taylor mill was one of the later ones, built by Thaddeus Barker, the youngest child of William Barker, in 1799.

F-5-9 Batchellor’s Small Grist Mill This location near Bailey Brook has a small stone retaining wall that may be the foundation for the “small grist mill” that is shown in Breed Batchellor’s settlement survey prepared in 1773. It may also be the location of a cider mill operated by [...]

B-2-5 Josiah Woodward Josiah Woodward bought land and water rights here in 1804 and moved here from Marlborough with his wife, Keziah, building a large two-story frame house. His wife died in 1810 and he remarried Sally Wakefield of Dublin. Josiah deeded half the home, mill and 110 acres [...]

C-4-15. Stephen Harrington purchased part of the Burnap Farm from John Burnap in 1802. He clearly intended to develop business enterprises there as the purchase included lots that contain the foundation of the tannery, a shoe shop, and the site of a bark mill in the southeast corner of Nelson Road and Henderson Road today.

Nelson’s population had peaked by the time Nehemiah Flint bought his farm in 1827. The sheep craze had resulted in 85 -90% of the land being cleared. It was the height of the family farm producing surpluses sold into other states. But farmers were beginning to move west for more fertile, stone-free soils.

The history of the small village of Munsonville is a familiar New Hampshire story as it has all the elements of the history of similar villages throughout southwestern NH during the 100 years from the 1850s to the 1950s.

The Graphite Mines of Nelson

Among the distinctions that grace Nelson and its environs is the presence of three historic graphite mines. The mines – small “open pits” – are inconspicuous to the casual visitor...

Especially in Nelson, because of the available lumber and water supply, the early farmer found that he could keep up with rising living costs by supplementing his income through a small mill or shop and by manufacturing within the home.

A Sense of Nelson/Munsonville with George Washington Holt

George Washington Holt wrote a journal which provides detailed, but brief, accounts of his daily activities. His life probably typified the lives of many who grew most of their own food raised in small gardens, kept a few animals, bartered time for time or for goods and worked for several individuals or one of several manufacturing operations of the time for wages.

The solid stone walls of the foundation of the large mill built in Munsonville are all that remain of this early industrial site at the outlet of Granite Lake. In 1814, Asa Beard built the Cotton Factory and a boardinghouse for mill workers in what was then a remote section of Nelson to take advantage of the waterpower provided by the dammed up Factory Lake.

In the woods off Old Stoddard Road lies the site of the home farm of Stephen Osborn. All that remains today is an extensive array of building foundations that once housed Osborn and his extended family.