The outline of stones on the surface of the ground approximately 15 x 24’ and the presence of a chimney base suggest this is the location of an early settlement era dwelling. It is about two hundred feet south of Samuel Skinner’s house at E-4-9. The date and builder can only be guessed at based on the scant written historical record. It was part of the land purchased by Samuel Skinner in 1778 and was likely on the property then.

It may have been built by a mysterious early settler named Bruce. The only record we have of Bruce’s presence is contained in the description of road number 22 built in 1774: “…then to a spruce in the Chard land near Bruce’s Camp, then to a stake and stones in John Stoud’s land being the west side of lot number four in the sixth range…”  John Stroud’s place is the next place to the south of this location. This citation describes a settler named Bruce who had a camp and was burning the woods to clear land for agriculture. If built by Bruce, it would have been built in 1773 or 1774. It may have been used for a short time by the Skinner family while they built at E-4-9. 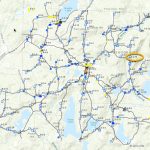