He was the first official settler of Monadnock #6 coming here in 1766. He moved here from Keene with his wife, Ruth. By the time of the 1773 survey, he had 100 acres cleared, a frame house, and a barn.

Breed was the Clerk of the Monadnock #6 proprietors and the first meetings held in town were at his home. He lived here in the town until 1777 when he joined the British Army, subsequently fleeing to Canada after being wounded at the battle of Bennington. He died there in Canada in 1785.  The Batchellor holdings were confiscated by the State of New Hampshire, but Ruth Batchellor successfully petitioned for the restoration of the home farm.

Ruth lived on the place with her son, John, until 1828 when she moved to the Chase Tavern in Keene, the home of her daughter, Betsey, and her husband, Samuel Chase. She died there in 1840 at the age of 94.

A new house has been built on the site. 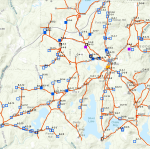