For newly incorporated Packersfield, the years 1774 and 1775 saw a great deal of growth.  A census taken in 1773 reported 117 residents in Packersfield; by 1775 there were 186 people in town, and by 1790 there would be 721!  Men using axes and oxen were clearing land. Numerous roads were laid out. The early battles of the Revolutionary War and the Declaration of Independence seem not to have slowed the pace of settlement, though it forced the chief architect into exile in Canada.

Breed Batchellor, the man who had worked so hard to transform Monadnock Number Six into Packersfield, refused to sign the Association Test, an oath of loyalty to the new country. He became the enemy within. In a very short time the people who had ardently supported him in the struggle against James Blanchard in the incorporation fight turned against him as a traitor.

Packersfield sent many of its young men to fight for independence and bought military supplies to support the effort. A petition sent by vote of the town meeting reflected the commitment Packersfield was making to the war and its dread of Breed Batchellor, the Tory in their midst.

“Voted to send the following petition to Colonel Enoch Hale: [Hale was colonel of the 15th New Hampshire Militia Regiment.]

They [the citizens] are generally of a mind that as they are fighting their enemies they have one more dangerous to fight against at home than any abroad. Name by Major Breed Batchellor who from the very first appeared inimical to the People of America and has discouraged the cause thereof and threatened the lives and the health of the good people of this town so that some that have intended to have gone in the service are afraid to leave home and to have their families exposed to his resentment. The committee of the town have for above a year endeavored to have him brought to a proper trial but could not be heard.  And when the committee of other towns tried and condemned him in the goal, he was let at liberty without our knowledge to our astonishment. And all the information we could get after inquiring was that the goaler to your honor told us he was at liberty. And since we hear he has been tried at the General Court without the proper evidence which might have been produced if summoned which we think an arbitrary proceeding viz. so looked on by our neighbors. We are willing and have signed to abide by the order of the Continental Congress. We think the state ought to allow General Washington either to make them that are enemies swear to be friends or try them as foes.

And Breed Batchellor has had his name returned to you as a man to go in the service and has done nothing but still refuses. He is much the [reviled] man in this town. We have sent near half our number the first year and more than our proportion since and have lost a number in the war and there is but five young men left in town.  And they have bin in the war and we are poor, but we would see justice done us. We will do the utmost of our ability in the common cause.”

On June 17th the New Hampshire General Court issued what amounted to a warrant for Batchellor’s arrest: It voted that “the said Breed Batchellor and Robert Gilmore be confined to close keeping on some goal in this state, there to remain until further order of this Court or the Committee of Safety, or until they are otherwise liberated by due course of law.”

Samuel Wadsworth, in his Historical Notes with Keyed Map of Keene and Roxbury 1932, describes Batchellor’s final months in Packersfield:

“Being a staunch and outspoken Tory and a man of considerable wealth, public feeling against him was very strong. In 1776 and in the early part of 1777, to escape the wrath of the patriots, he hid himself for some three months in a cave south of his house where his wife supplied him with food. His hiding place becoming known he fled toward the Pinnacle followed by Patriots who forced him to the top of the hill where he was surrounded on all sides except the north. This being a precipice some 50 feet high, the patriots believed Batchellor could not escape but he knew a cleft in the rock, down which he made his way and afterwards went to Canada. Batchellor joined the British Army and in the battle of Bennington (August 1777) he was recognized by Richard Farwell, a former townsman, who fired at him, wounding him in the shoulder so badly that his arm was nearly useless afterwards and ending his active career.”

Breed Batchellor had come full circle. He had been born in Wenham, Mass., December 11, 1740. At age 16 he joined the British Army serving in the Crown Point campaign of the French and Indian War. Afterward he learned the surveying trade. Wadsworth describes him as an energetic man of great natural ability. During his association with Packersfield, he bought 11,310 acres of land. When he fled to join the British Army in 1777 the remaining 3,516 acres including his home farm was seized by the state and sold at public auction. His wife Ruth had to petition the legislature to allow her to keep the homestead. She was successful and several of Batchellor’s sons lived in the area after his exile and death. 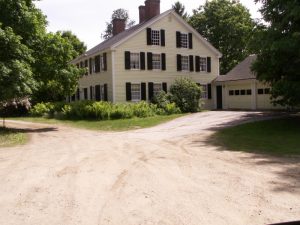 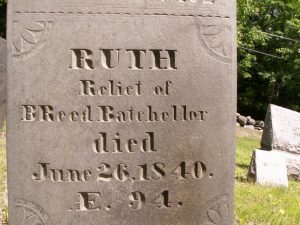 The family’s direct connection with Nelson ceased when the southeastern part of Nelson where the family lived was separated from Packersfield by the legislature in 1812. With pieces of Keene and Marlborough, it became the town of Roxbury. Ruth and her son, John, owned the original Batchellor farm comprising 260 acres in what had been the southwest corner of Packersfield until they sold it in 1828 when Ruth would have been 82 years old. She moved to Keene to live with her daughter Betsey Chase at the Chase Tavern on Court Street. She is buried in the Court Street Cemetery.

Years later the town would change its name, severing its ties with Thomas Packer, too.