Beriah and Abigail Wetmore and their family arrived in 1771 building a pole house on a 104-acre piece of land here. In 1773 they had 18 acres cleared and had built a cabin. For some reason, probably poor financial circumstances, the family was “warned out of town.” This was a process towns used to force possible welfare cases to leave before they became a burden. The person warned rarely left, but the town was absolved of responsibility. At this time they sold their farm back to Breed Batchellor and bought an unimproved lot (E-4-12) of a similar size for half the cost and started again. They left for Greenfield, Massachusetts eighteen months later.

George Brintnall built a house on the site on the old Wetmore cabin in about 1776. He served as moderator of a town meeting in early 1777. Brintnall was succeeded by Samuel White in 1787 moving to Packersfield with his wife, Mary from Mansfield, Massachusetts. They were succeeded by Nathaniel Woods in 1791. The Wood’s raised twelve children there. General Simon G. Griffin says that he moved ¼ miles to the northwest (E-3-6) later in life. Nathaniel built the farm to well over 200 acres. In 1829 he sold the place to his son, Samuel, reserving the right to live there. It was at this point he seems to have built the house at E-3-6. Samuel sold the place, probably after his father’s death in 1849, to John Hale and he to Judson Blodgett in 1852. Blodget was there a few years selling to Oliver Dow in 1858. Dow owned several hundred acres of land in that part of Nelson, but lived in Hancock. In 1863 he sold the place to John Eustace. He may have been Christopher Eustace’s (C-4-18) son. He wasn’t there long before moving to Vermont in about 1869. The house is shown on the 1877 map of Nelson as inhabited by “A. Woods.” It was abandoned soon after.

More recently, Ethan and Pamela Tolman built a modern house next to the old cellar hole. 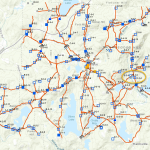