Nothing remains of this home today.  It was probably built originally as the house for the operator of the town’s first saw mill located at C-4-20.  It was probably occupied by Joshua Kitteridge when he first purchased the mill. It was small and he, soon built another house across Center Pond Road for his wife and their children. The use of the house is unclear until 1836 when it was purchased by Sally Baker. 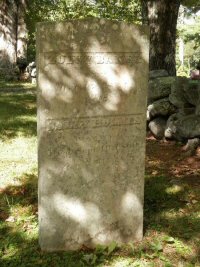 Sally Baker’s husband, Zolvy, died in 1834 at the age of 37. Zolvy married Sally (Holmes) in 1828 and died a few years later leaving her with 2 infant children, Sally and Benjamin. They had lived at C-3-4 prior to his death. Perhaps under straightened circumstances, his widow and their two children bought 2 ¼ acres here in 1836. She was here probably until she died in 1860.

Beyond that occupancy is unclear. The house appears on the 1877 county map as part oi the clothespin factory and on the 1892 map occupied by C. Robbins.

Visit her gravesite in the Nelson Cemetery