Bannister Maynard moved to Packersfield from Templeton, Massachusetts in 1785. He increased the size of his farm substantially before selling it to George Dodge in 1809 and returning to Templeton where he died in 1827.(Memorial# 149663758).

NOTE: For more about Banister’s military career, see the pamphlet “Celebration by the town of Nelson”.

George Hubbard Dodge, his wife, Maria Huldah, and four young children moved here from Temple, New Hampshire and farmed until they moved to Hancock. The farm was acquired and enlarged by his son, George W. Dodge (styled Junior.) He and his wife Mary (Wilson) had four children before they moved to Hancock themselves in 1837.

Thomas J. Baker succeeded him in 1837 and stayed for ten years. Cyrus Osborn moved here from F-5-10 in 1847. In 1847 he moved to New Ipswich, NH and transferred it to his son, Dalphon Osborn, who lived there until the moved to Peterborough, NH in about 1860.

He sold the farm to Russell Kitteridge who lived next door at C-3-4. The place was abandoned then. 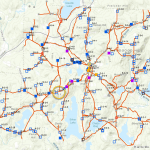