Asa Wilson:  This is the traditional home of the miller who operated the grist mill at D-4-22. It sits a few feet north of the brook that empties White Pond and a few feet from the mill first built here by Henry Melville in 1796.

The house was constructed by Melville to house the mill operator. Asa Wilson was the son of Archaelous and Sarah Wilson and came to Packersfield as an infant. He married Katherine Wright and raised six children. At the age of 46 and on the death of his mother, he gave up farming on his parents’ place (E-4-13) and moved here to operate the mill for Henry Melville. In 1828 he purchased the mill and operated it until he retired and moved to the Lydia Felt house in the Village in 1852. He sold the mill to Silas French. Silas was not a resident mill operator; he lived in an elegant home at C-3-7.  The house was, undoubtedly, retained as the miller’s residence. The mill had several owners and was eventually bought by Caleb Goodnow, a miller from Sullivan. Goodnow idled the mill in 1862 and sold it to George Devaul with the provision that it could never be operated as a gristmill. It is likely that this house was abandoned then. 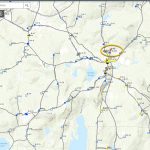