Archaelous moved to Packersfield from Temple, New Hampshire during the Revolutionary War. Was an early town selectman and hired by the town as an assistant workman when the second meeting house was built. Bought the property from Joseph Stanhope and built a new house on this site – Stanhope’s home being a pole house. Lived here until his death in 1802. His wife continued there until her death in 1825. The house was abandoned at that time. 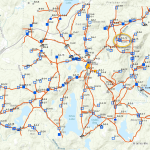