Settlement in Nelson had increased remarkably in the years immediately after the revolution increasing from 186 in 1776 to 721 by the first national census in 1790.  With that growth came things that made settlements, proper towns: things like schools. In an era when we worry about dwindling school enrollment in our town of seven hundred, it is ironic to think back to 1790 when Nelson (then Packersfeld) had seven hundred and twenty-one inhabitants and a surfeit of students.

Nelson divided itself into nine school districts in 1789.  Thanks to Ethan Tolman’s donation of a collection of his mother’s papers, the Town Archives has the written record on one of those early school districts from 1820 to 1858. School District Seven included the Southeast Quarter of the town from the area of Tolman Pond (Bryant Pond in those days) to today’s Harrisville it included the Bancrofts at the current junction of the Cabot and Tolman Pond Roads, the Yardleys on the Clymer Road, Samuel Scripture on the Scripture Road and Grovers and Morses around Tolman Pond. Later came the Tolmans, the Bryants, the Farwells and the Harris’s of the mill village that came to be named after them.

When those first school districts were established in Nelson, each was given their proportional share of 270 pounds and required to build a school. School taxes were levied on the whole town and funds were allocated to each district in proportion to their valuation.  Districts held their own meetings at which they elected officers, selected and paid teachers, arranged for board for those teachers, set the starting dates for winter and summer school, arranged for heat and provided for the upkeep of their school property. In the records of School Number Seven we have a detailed account of the operation of a school from 1820 to 1858.

At first these schools were all made of wood; most were rebuilt in brick early in the 19th century.  School District 7 starts our story with the original wooden schoolhouse built about 1790.  It was located “on the road between Captain James Bancroft’s house and Dublin” which we know today as the Tolman Pond Road.  By the time the records of this district begin the schoolhouse was 30 years old and, probably a bit too small for the district population.  In 1820 Nelson was at it population peak at about 1100 inhabitants and about half of them were of school age.  The typical schoolhouse housed perhaps 40-50 scholars, though there would never have been 100% attendance.

The school year had two parts: winter school and summer school.  In the early days the two terms were 8 and 6 weeks respectively with start dates of approximately December 1st and July 1st avoiding the harvest and planting seasons so that important part of the workforce could attend school and not hinder the farm family’s main enterprise.  The summer term was more lightly attended than the winter. Eventually the terms grew to 12 weeks for the winter school and 8 weeks for summer with less attention paid to the crop seasons. Typically winter school was taught by a master and summer school by a mistress.

The first meeting of School District number seven of which we have a record was held on October 2, 1820

“The inhabitants of School District #5 [7] are notified to meet at the school house near Timothy Bancroft’s in said district on Monday, the second of October next at 1 o’clock P.M.”

In a meeting held then, and adjourned twice that fall, they set the start date of winter school at January 1st, accepted bids to provide wood and keep the fire from five different men for the winter term of 8 weeks @$1per week.

They voted to adopt a rule stating that “if any scholar shall damage the school house, he or she shall repair it at his or her own expense.”

They voted to replace the roof shingles agreeing to buy pine shingles sufficient for the front roof @$2/1000 delivered and 2,000 spruce shingles for the back roof for $3. They voted to accept the low bid to board the master from Samuel Scripture at 72 cents per week.

It was a typical meeting except that there is no record of who the teacher or and what he was paid.  As Samuel Scripture was boarding the “master”, we know the teacher was a man.

Re-shingling the roof was probably not the first repair to the old school building after 30 years of weathering and the old building was soon the topic of many school district meetings and a substantial expenditure. Almost immediately, was clear something major had to be done; they decided to build a new schoolhouse. 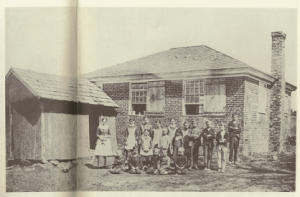 Note: The decline in population from 1870 – 1880 reflects the secession of southern Nelson, incorporated into the new village of Harrisville. 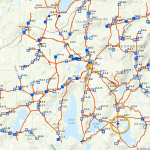