Amos Skinner was an early settler coming in 1774 from Mansfield, Massachusetts with his wife, Elizabeth and two children. Their son, Zelotus was born here. Held numerous town offices during his brief stay including moderator and chairman of the Committee of Safety. He signed the Association Test in 1776 and was elected lieutenant of militia that year. Samuel was the older brother of Dr. Samuel Skinner (E-4-9). In about 1780 the family moved to Jamaica, Vermont.

David Beard bought the place from Amos Skinner in 1781.   He came to Packersfield from Wilmington, Massachusetts toward the end of the Revolutionary War. He answered the call at Concord in 1775 and served through the surrender of Burgoyne after Saratoga in October 1777. He bought the farm of Samuel Skinner in 1781 and added the piece here two years later.

David and Hannah Beard were marred in 1769 and raised five children before moving to Nelson where Asa was born in April 1781. Five additional children were born. They seem to have moved from here to their daughter, Dorcas Stiles’, home at B-4-6 in the early 1820’s. Hannah died in 1829 and David in 1836. Both are buried in the Munsonville Cemetery.

They were succeeded by Joseph Beal II, son of Joseph and Elizabeth. He moved here from his parents’ home at C-3-4. The Beals moved to Keene sometime after 1860 and were succeeded by George Washington Barker, son of Chauncey Barker and grandson of William Barker. He moved to Harrisville before 1880 and the property was acquired by Louis Cabot. 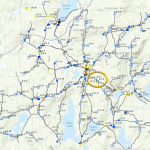