The cellar hole here was filled in about 1995 when a new house was built on the site.

Both Struthers and the 150th Anniversary Celebration (probably Struthers; source) state that Brown’s farm was located above the lead mine where John Breed later lived. Brown’s deeds and the official surveys make it clear that Brown settled lot #2 range 9 in the northeast quarter — one lot to the north of that location.

There are two early cellar holes on that original Brown property: D-5-4 and D-5-3.  Brown probably built both places, It is clear from the early record of road #33 that though Abijah Brown owned the property here, Isaac Brewer lived here in 1778. He was gone by 1791 when he bought another farm in Packersfield. Probably Brown built this house in about 1778. Isaac Brewer may have been his tenant. Probably the family moved here in 1791. Abijah died about 1812 and Deliverance in 1820. His heirs sold the whole farm to Nathaniel Breed II in 1814. He lived here from 1824 until he left for Alstead in 1835. Jonah Osgood succeeded and was here until 1858. The 1877 map shows the house occupied by one L. Champency in 1877. It was gone by 1892. 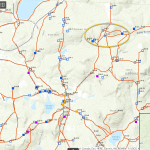