Only surface foundation walls remain at the site today. Three Gates brothers arrived in Packersfield from Bolton, Massachusetts in about 1790. Abiather bought land here and built a house in 1791. In 1793 he married Lois Holt ,the daughter of Daniel and Alice Holt. They had two children born here. He transferred ownership brother to his brother, Laban a house joiner, briefly in 1794-1795 and Laban may have lived there In 1801 they sold the place to Dr. Silas Marshall and moved to Madison, New York.

Silas Marshall came from Hollis, New Hampshire where he had studied medicine with his uncle. Dr. Samuel skinner was also serving Packersfield in this capacity. When a third physician arrived about 1812, Samuel moved to Templeton, Massachusetts and the place was abandoned. 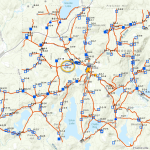