Aaron Beal’s Log Cabin:  Aaron Beal (also Beel) was one of Monadnock #6’s earliest settlers. He bought 200 acres, part of the original right of Joseph Parke here from Moses Adams in late 1769. By the settlement survey of early 1773, he had a log cabin built and 27 acres cleared. By mid-1773 he had built a house that was cited in the description of the road built that year from the meetinghouse to Dublin. The cellar hole here is small with a well adjacent to it and was probably inhabited from 1770 until Beal completed his house and barn at C-2-2 in 1772 or 1773.  His family was small. He and his wife, Susan, with two small children moved here, seemingly from Sudbury, Massachusetts.

The history of this place has been difficult to determine. Its appearance suggests it is quite old and was not inhabited for very long. It is on the same 200-acre piece that Beal bought from Moses Adams and the land was not subdivided until relatively recently. Whoever lived here lived on land belonging to Aaron Beal. A road was laid out very close to the site in 1774 to serve Philip Bailash (D-2-8), but the description does not mention passing anyone’s home. All this suggests this as Aaron Beal’s log cabin.

The Dandy Button ~ The decoration would have been gold guilded

A close examination of the site reveals further evidence for the suggested date and short habitation period. There is no obvious chimney  — no bricks or small stones – suggesting a chimney made of mud and sticks. A search for artifacts turned up few. There was a pewter and a Dandy button both typical of those worn in the 1770’s. A normal frame structure would leave many nails. There were two found. Both were Rose head style, forged nails typical of the same period. A log cabin would have had few nails, perhaps used in the construction of a door. Aaron Beal was a blacksmith. Perhaps these were forged by the smith himself. 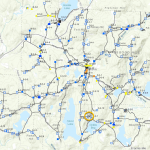