A cold red sun rises over City Hill as it has for millennia. No one is about in Nelson village to view it, though. The temperature is in the teens. It is the second Tuesday of March 1946, and, just as in each of the years since, the Nelson Town Meeting will decide many of the directions the Town will take the following year: who will lead, how much must be raised in taxes, what will be done about the most pressing issues the Town faces.

By 7:30 Robert Curtis walks up the road to the village from the house he lives in on what is then known as Curtis Road, as he and his family are the only residents on it. Now called Henderson Road, at least eight families live on it. He is in the eighth grade, and will graduate in the spring at ceremonies held in the Munsonville Church, along with graduates of the other room of the Nelson school, which is in Munsonville. (Both villages are in the political and geographic unit called “Nelson”.) The only graduate that year of the Center School in the village, he is thus its last graduate. 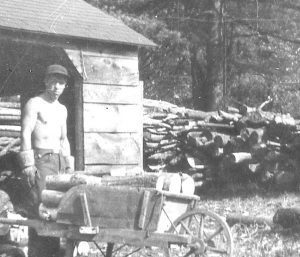 Robert Curtis getting wood for the stove.

His job is to light the fire in the wood stove in the School, so that it will be at least starting to get warmer when the teacher and the other students arrive in an hour or so. (He is paid 50 cents a week for this task.) His attendance is perfect: he does not miss a morning all school year. Soon, Gordon Tolman arrives, driving his son Ethan, in the third grade, and the teacher: Miss Josephine Stewart. Miss Stewart boards with the Tolmans during the week. In 1946, as a recent graduate of Keene Teachers College (as Keene State was then), she of course does not have a car. (And gas was still rationed.) Nor is there any other place for her to live in Nelson than in a private house. 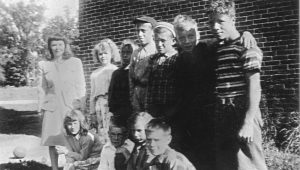 Among the school children in the Center School (now known as the Old Brick School, which serves as the town office), anticipation runs high. Town Meeting will be held next door, in the Town Hall, starting at 9:30. At 1:30, School Meeting will be held. 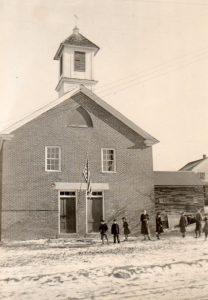 An earlier photo of the Center School, District No. 1.

The school children of course sneak over as often as they can to see how their elders are planning the next year, for it’s just about the most excitement the village has seen all year! They are just as often sent back to the school. Miss Stewart speaks sharply to them. But sometimes one or more of them can stay long enough to gain a few memories:

Wilmer Tolman, selectman, speaks strongly in opposition to closing Murdough Hill Road. (Though there is only one resident on the road in 1946, in time there will be many. We must look to the long term good of the Town, not short-term advantage, is the substance of his message.

Alice Sharples, librarian, reports a total circulation of 867 books and periodicals. (She had been paid $52 for her work the preceding year.)

Ed Murdough, road agent, reports on work done during the year on town roads, and explained what would be done over the coming year. (A total of $6,127.97 was spent on Town roads the previous year. An increase of $1.42 was budgeted for the next year.) 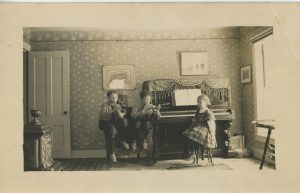 Siblings Gordon, Rodger and Doris. Gordon taking to the stage at a younger age.

But for me, the really big memory was watching my father, Gordon, run the meeting as moderator. Like many men of his generation, he had grown up in a society that placed great importance in the conduct of civic affairs. He knew by heart the rules of conduct by which meetings in that era were run. Many of the voters in the meeting hall were equally well versed, so there was little risk that the meeting could be controlled to the detriment of the group’s wishes. He knew the issues; he knew the speakers; he knew how long to allow debate to run. (All this I know only in hindsight, of course.) He would at that meeting give up the job of moderator as his MS progressed. Barry Tolman’s father, Fran, continued as moderator for many years. He was more polished in his approach than Gordon, partly by temperament, I suspect, and partly as a consequence of his long-time service as Clerk of the General Court (as the NH State Legislature is called). In his time as moderator, no one watched him more closely than I.

Town Meeting ends: 16 warrant articles have been dealt with, and town officers have been elected. The Town is ready for a new year. 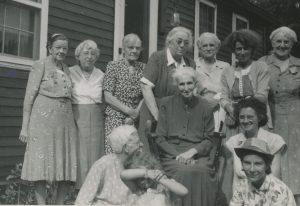 Lunch is eagerly looked forward to, by adults as much as the children, I suspect, for the ladies of the town – Ada Upton, Mabel Curtis, Cora Tolman, Cora Alice Tolman, Sadie Tolman, Mildred Tolman, Frances Upton, and many others – indeed, most others – will have prepared a Town Meeting dinner. Ham, scalloped potatoes, cole slaw (if anybody has any cabbage left), and vegetables: root crops, mostly, or dried beans, or canned vegetables. No frozen vegetables, of course, nor any from Chile or the Imperial Valley. And pie of all kinds: apple, squash, Boston cream, mince. Not much chance to have a regular school day when off and on all morning people walk up the stairs leading to Concert Hall over our schoolroom to set up the dinner.

Concert Hall (as the upstairs room was still called) was at that time still owned by the Church. The Town owned the roof. So much for the separation of church and state. Ritual permission was always granted the Town to use it for Town Meeting dinner. The older children looked forward to taking serving platters to the tables lined up in the Hall from the pass-through from the little room, still called the kitchen, at least by me – as indeed it was that day.

In 1946 there were 124 residents 21 or older, and thus eligible to vote. Some were really summer residents, and thus unlikely to have been at the meeting. While turnout was certainly better on a percentage basis than it is now, it seems unlikely to have been 50 percent or better. In any case, it seemed to small children as if everybody in town was at Town Meeting dinner. 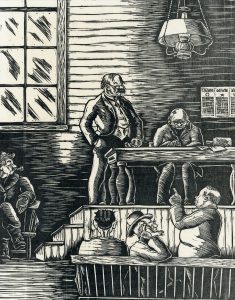 In the afternoon, School Meeting is held.  Fran Tolman is elected moderator. No mention is made in the record of an event that will split the Town into two camps over the following year. We can see evidence of this in the Superintendent of Schools report the following year: “Miss Josephine Stewart, having resigned at the close of the school year in June 1946, left a teacher vacancy with no suitable candidate available for the Nelson Village school. At the beginning of the school year in September 1946 the eight pupils from the Nelson Village area enrolled in the Munsonville or Harrisville schools.”  (This gave the Munsonville School 23 students in 8 grades, rather than Munsonville 15 in 8 grades, and Nelson 8 in 8 grades.) Interestingly, this written record supports one thing I learned in the Nelson School: “Reading rots the mind” (a common saying among the children), because in fact I went (transported by my mother) to Dublin, rather than Harrisville.

Evidence of this event is contained in the next year’s school warrant: “Article 9. To see if the school district will vote to make any change in the present organization of the schools.”  It is clear from the record (and from my memory) that the School Board had made the decision to close the village school for lack of attendance. Arvilla Tolman (my mother) is chair of the school board. Some people in Town refused to speak to her for years thereafter, so angry were they at the closing of the school. While Nelson at its population peak in the 1820’s had nine school houses, hereafter there would be, as now, only one building, and one district. In the past, each district was responsible for its own school. (One such school is described in some detail elsewhere in the report.)

No sign of the rupture that will change forever the nature of Nelson schools is evident to the schoolchildren. They go home from “school” on Town Meeting day tired, happy, and full of pie. At the end of the school year they pose with their teacher for a school picture next to the schoolhouse. 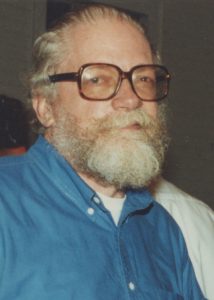 Ethan, as Town Moderator, following in his father’s footsteps.

Author’s Note: I have tried to be as factual as possible, but memories from more than 65 years ago are apt to be faulty. The only research done was to look up the weather; and to review the relevant Town and School Reports. All numbers above are believed correct. In comments about discussion during the Town Meeting, I took the liberty of placing Wilmer’s comments in 1946. I remember him saying much the same words. I don’t know if he spoke them that year or not, but it was a recurrent theme, for him and for the Town. Nelson’s population had been declining for more than a hundred years, and so, as houses were abandoned and burned or fell down, the citizens were faced with continuing expense and a declining tax base. Wilmer, to the best of my knowledge, spoke strongly of the importance of maintaining a road (communication) network to link the Town together. Not just Murdough Hill Road was faced with abandonment, but also Towne Farm Road; Old Stoddard Road; Long Pond Road (Nubanusit Road) past the Upton farm, and others. Some were given up in this period, but many were kept. Neighboring Roxbury, closer to Keene and more under its thrall, took the other course, and nearly vanished. Today, the network of local importance is high speed internet, and, just as was the case so many years ago, the Town Fathers drag their heels in the face of change. (This was written some years ago.)

Editor’s Note: Ethan lists women who prepared “town meeting dinner,” and the names are all from the east side of town, or the village, and not Munsonville. The reason for that is two-fold. First, as a third grader, he would not have had any contact with people in Munsonville. He would not have known them, and certainly would not have remembered them. They went to different schools and, in fact, there was little contact between the two parts of town. A phone message between the two parts of the Town cost 15 cents – real money in 1946 and not spent carelessly. The federal minimum wage in 1946 was $0.40 an hour, and the average annual income in America was $2,600. To drive between the two parts of town in a time when gas was still rationed was rare indeed. That is of course part of the picture Tolman paints of life in 1946.