A Bicentennial Profile of an Old Farmhouse

A Bicentennial Profile of an Old Farmhouse

Of the several houses in these parts as old or older than the Tolman Pond farmhouse, it’s the only one that looks its age – grey, wrinkled, gnarled like bark that woodpeckers have worked over. A hundred years ago – according to a stereoscopic slide – it looked even worse and was in a state of collapse. Then at the turn of the century, it was jerked to its feet and during the next hundred years given a series of transplants and internal transfusions that wrought wonders. 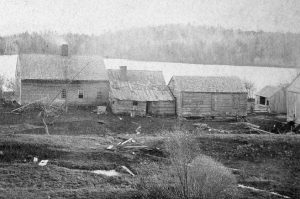 Stereoscopic slide of the back of the Tolman Pond Farmhouse, c. 1860s

An old foundation and two parallel stone walls up on the shelf of land where Fran I built our house indicate that long ago  – before Tolmans – the first house on the property was at this higher level, as was the old road to Nelson (or rather, to Packersfield). Probably the pond was bigger then due to a beaver dam at the outlet, and after the beavers were trapped out the pond shrank to its present size where a new house was built in 1791 on the new shoreline. There was no thought of drainage and the new cellar was below lake level. Neither pollution nor the environment has been invented and cows, horses, humans, pigs, and hens all contributed to pond contamination. The ills and diseases due to this lack of sanitation were part of the norm of the day. Then came the Age of Plumbing. 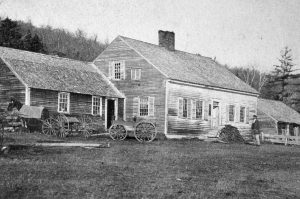 Stereoscopic slide of the front of the Tolman Pond Farmhouse, c. 1860s

This revolution took place when Sadie and Wayland Tolman (Ma and Pop) lived there; and although Pop was blessed with a disposition immune to most petty aggravations, he was goaded into doing away with the privies and installing indoor plumbing. Water was induced to trickle from the hill overland through hoses to camps and outbuildings. Porcupines enjoyed the flavor of these hoses, causing a series of cheerful little waterspouts among the rocks and weeds.

By the time that Barry inherited the farmhouse, plumbing had stimulated a rage for cleanliness here and elsewhere. Now summer people who before had been content with a daily dip in the pond developed a passion for washing; cleanliness was rampant. The old farm system became a circulatory monstrosity and Barry was driven, by necessity, to be the Rubiest Goldberg of all plumbers. He devised a tormented water-and-sewage system that defied the laws of logic and gravity. To and from the farmhouse and to and from camps and cottages he created a maze of tanks, pumps, tubes, and pipes hitched together by valves and joints (the hip bone connected to the thigh bone, the thigh bone connected to the shin bone), and through these water was forced to an artificially lush swale, a bit of tropical paradise – the leach field.  But it works – now it works; however, should someone dig a hole, say to plant a daffodil in its midst and puncture some vital organ, the whole works could erupt.

To Barry and Karen, the farmhouse is like an old, mangy lion, a primitive, picturesque relic – the “King of the Beasts” – one of the last of its species to survive in a hostile world. 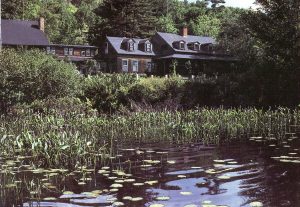 They care for it with wary affection, knowing that outwardly it may look like a dear old pussycat but that it has claws, which at any time may strike and tear off another chunk of their bank account. Its body rumbles with incipient disorders. Its vulnerable plumbing demands constant attention and daily check-ups to control low blood pressure and high taxes.

All this takes its toll. There are times when Barry looks grizzled and gnarled as if woodpeckers had gotten to him, and I have to remind myself that it’s the farmhouse, not Barry, that is two hundred years old. (Karen, due to some mysterious form of self-defense, has resisted these signs of weathering.)

In recognition of the farm’s bicentennial to be celebrated on the glorious Fourth, you are invited to come to the Pond. Come – but stand well back while the little cannon gets its overcharge of black powder, grass, and wads of newspaper. For after the fuse has been lit and the flame reaches the cannon, there’s a blast – a real BLAST. So do stand well back, the cannon also may well be two hundred years old! 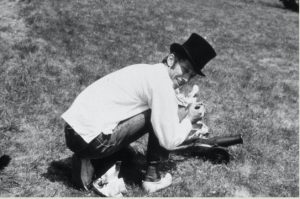