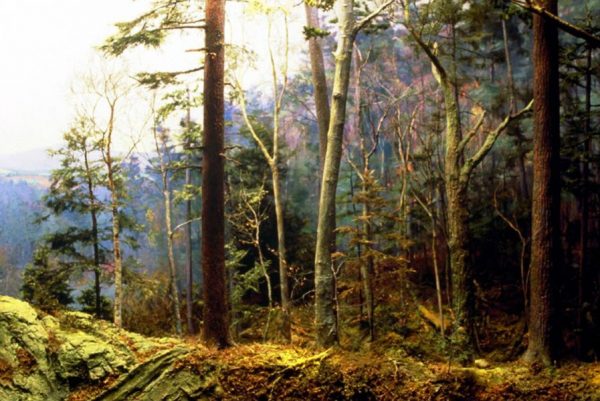 The settlement of what would become Nelson was established by a grant of land from King James I, who awarded John Mason a charter of land which included all the land between the Naumkeag (today called the Merrimack) and Pascataqua Rivers extending 60 miles inland. The place was to be called New Hampshire and Mason’s charge was to settle the area. Mason died in 1635 leaving only minor heirs. The title to the lands fell into dispute – a dispute resolved by a court case in 1746, which awarded the right to most of the original grant to John Tufton Mason who in turn sold his rights to a group of men who came to be styled the Masonian Proprietors. On December 6, 1751 the Masonian Proprietors granted “Monadnock Number Six” (as the area of Nelson was then identified) to another group of proprietors who would have the direct responsibility of settling the town. One of them was Thomas Packer, who never in fact lived here, but for whom the town was briefly named. The first settlers were Breed Batchellor and Dr. Nathaniel Breed, who arrived in 1767, and it is this year that has been chosen as the birth-date of the town, which was officially incorporated in 1773. The town changed its name to Nelson in 1814. 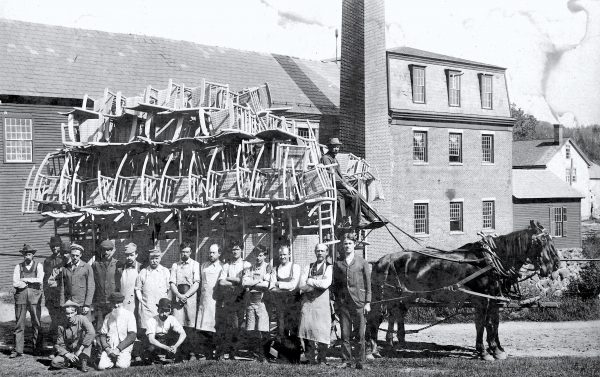 A load of chairs from the Colony Chair factory in Munsonville.

Like many small New England towns, Nelson had a steady growth in population through the first few decades of the 19th century. Population figures are somewhat misleading, as the town in those days also included what is now the northern part of Harrisville. However, with the opening of the west, a decline in sheep farming, and the Civil War (to which Nelson contributed significantly), the population fell into a decline which began a very slow reversal in the 1920s. A chair industry once flourished in Munsonville (a “suburb” of Nelson on the north side), and small mills dotted the landscape. But the town never had railroad service, and its hilly rocky terrain was a deterrent to aggressive settlement. Today there are no stores, and mostly just cottage industry. Nevertheless, the town has a rich cultural heritage of writers, artists, musicians and craftsmen, and a very vibrant community spirit. 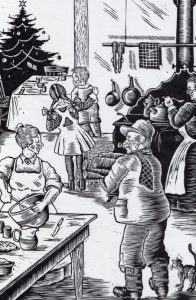 Preparing for our holiday tables. Print by Fran Tolman

While this website endeavors to portray Nelson history accurately, the flavor of the town has been seasoned by flamboyant eccentric characters, and tall tales, most of which serve as smile or laughter-generating entertainment. We trust the explorers of this website to distinguish between the dry data and the more frivolous musings, though the latter does indeed say a lot about the history of the town.

While the history of the town by definition must start with those European settlers who stepped into an area designated by the British Empire, the history of the land, and its occupants, is an older story. As is noted elsewhere, this website is – and will always be – a work in progress. One of our goals in the coming months will be to fill in some of this older story, and we welcome suggestions and resources to help in this process.  At this time there is no known evidence of settlement, or even use, by the native population in pre-settlement times.

Saying Goodbye to a House

In October of 2020, the house most recently known as the Seaver house was torn down. In the year 2000 my husband and I were young, and we looked at that house that was old and alone and thought we would go pretty well together. I’m going to do my best to tell you a story of that house, but you’re going to have to hear it in the style of Paul, the last man to own it. Per his tradition, you won’t get any answer here about why the house had to come down, or what will happen next. Answers have to be earned by understanding how a thing matters in the grander scheme.

Nelson's population in the Census of 1790 was 721. The most recent (2020) Census shows a population of 734 - a whopping increase of 13 people over a 230 year period. Of course there are some twists and turns in the story, and we've added some graphics to spice up the tale.

Below are some randomly selected articles from this website. Refreshing your page will provide a new set of selections. Click on the title to read the full article.

Serviceberry in bloom above Spoonwood Pond Amelanchier arborea better known as shadbush or serviceberry, is among the first trees to bloom in Nelson each spring.  Tradition has it the name “serviceberry” comes from its association with burial practices in the early days. The blooming of serviceberry is supposed [...]

Our Write Wing: The Authors of Nelson, Part III

Princeton University over the years has been well represented in this area by summering scholars. Walter P. Hall, a history professor affectionately known to Princetonians as "Buzzer," was one of these. He often graced the podium on Nelson's Old Home Day. He has written several history books as well as numerous scholarly articles.

Live from the Tolman Pond Archives

Live from the Tolman Pond Archives is an iMovie, turned youtube. Karen Tolman merged the audio from her 2013 Library Forum presentation with photographs to help tell the story of an unlikely resort at Tolman Pond, a small neighborhood, in the small town of Nelson, in the small state of New Hampshire.

Frank Upton was the consummate Nelson story teller. Perhaps it was yesterday’s social media, but news got passed along around Frank’s table – the good with the bad. Stories that now make up a large part of our local lore were told. This was a true gathering of community vitality where things were shared and ideas were born. Frank’s kitchen was a “happening” place, where a kind of grassroots democracy thrived.