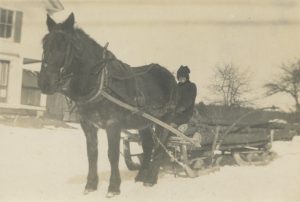 The author with a load of logs

Especially in Nelson, because of the available lumber and water supply, the early farmer found that he could keep up with rising living costs by supplementing his income through a small mill or shop and by manufacturing within the home. When household industries were concentrated in factories remote from the home, then the farmer-manufacturer was forced out of business.

Attempts to revive manufacturing were made with the State Agricultural Fairs. There were always classes for the household manufacturer, and in most, the Nelson entries were awarded prizes. New Hampshire Senator Isaac Hill complained in 1832, that there was “no longer…that profitable and wholesome employment, which was so highly beneficial to the prosperity and to the morals of the whole community.”

In driving from Harrisville toward Tolman Pond, and taking the third road leading to our right towards Nubanusit, and continuing to the end of this road we have come to the site of the old Tolman mills. All that remains of these buildings and reminders of past activities are three neglected dams and several building foundations. 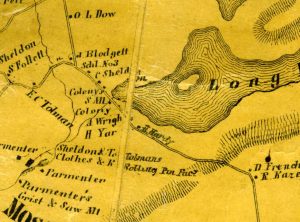 In walking beside these old landmarks or by the stream supplying power, we can envision a fairly good picture of these enterprises in years past. Originally this included the upper factory and the lower saw mill. The upper factory is shown on an 1850 map as follows: Sheldon and Tolman’s Clothes & Rolling Pin Factory.

The Tolman mentioned in this map was my grandfather, Eben C. Tolman, who lived from 1831 to 1903. This factory was destroyed by fire in 1874. Near this site can still be seen parts of the foundation stones of the boarding house where workers in the factory once lived.  Also up-stream there still remains the fieldstone portion of the factory dam, which probably supported a planked section with water gates controlling the flow of water. In the remaining stone section there still exists a perfect stone archway and, though it was built without cement, it has survived torrents of water passing through and the pounding of spring ice blocks for over one hundred years.

The lower saw mill was owned and operated by my grandfather and later by my father, Wilmer C. Tolman, who lived from 1870 to 1953. The Tolman sawmill was much like many others in adjoining towns, most of which had at least three or four water powered mills. The mill yard was filled with logs during the winter months and taken as needed to the so-called “ways”, which were huge timbers extending from well outside the mill to the carriage which fed logs through the big saw. Slabs and boards fell onto a bed of wooden rollers and were taken either to a cut-off saw or piled in front of a large planer (or surfacer). Also on this floor level was a shingle saw and a dado head machine for making matched or groove and tongued lumber and a variety of other shapes. Near the cut-off saw, just inside the mill, was a small car mounted on oak rails extending well out through the mill yard. When heavily loaded with lumber or slabs, it could easily be pushed outside by one man, where its load could be stacked or loaded on wagons for delivery. 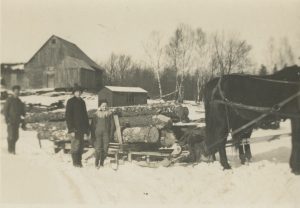 A load of logs for the mill at Mosquitobush

On the floor beneath were a few items of equipment including a small planer for planning  short pieces of lumber such as clapboards and, for many years, cloth boards which were sold to the Cheshire Mills in Harrisville for winding bolts of cloth until a removable and reusable device replaced the use of cloth boards.

The mill pond dam included a wooden strainer, through which water flowed into a large flue under the mill. Sides of the flume were made of heavy wide planks, each plank being laid flat and spiked to the one beneath, and at the corners of the flume these planks were crossed alternately to provide added strength against water pressure.

At the lower end of the flume was a monstrous cast iron object, which resembled a large old fashioned heating furnace in size and shape. This was simply the casing in which the power unit functioned as was known as a Four Wheel Down Draft Water Turbine. I was told that this machine was built and installed by Mr. John Humphrey, who operated a foundry in Keene and was regarded as an expert in hydraulic engineering.

Above the casing of the power unit a shaft extended above the floor, near the big saw, and capped with a hand wheel used to start and stop all mill machines. A shaft of about three inches in diameter extended through the side of the flume to a huge pulley which in turn transferred power through line shafts, pulleys and belts to all the machines in the mill.

Incidentally, the main shaft supplying the power from the turbine through the side of the flume, required a bearing inside the flume. Obviously, any metal bearing constantly under water pressure could not be lubricated with any lubricant except water. So the bearing was made of an oriental wood, one of the hardest and toughest known woods, called lignam vitae, installed with its end grain in contact with the shaft. It was amazing to me that this device withstood friction from the shaft with no indication of wear over a period of a great many years.

The old Tolman mill was discontinued and dismantled at my father’s request in 1951 and 1952.