“Sometime prior to 1792, Josiah Melville, the first of the family in Cheshire county, came to Packersfield with his wife, Sarah (Minot) to whom he was married January 28, 1790.” This entry in the Struther’s History of Nelson is all we would have known of Sarah (called Sally) Melville if not for the survival of two insightful reflections written after her death in 1811.

While the exploits of men in military and political history are more likely to be recorded, the life of most women, even a remarkable one like Sally, soon fade as the memories of those who knew her were extinguished. Yet here was a woman who by her kindness, sensitivity to the needs of others and willingness to serve enriched both the life of her family and the early community of Packersfield as Nelson was then called.

One of the items among the Melville papers donated to the Nelson Archives by Henry Melville Fuller (great great-grandson of Sally) was a small booklet consisting of a few yellowed pages sewn together by hand. It was written as a eulogy by the Rev. Gad Newell after Sally’s death. The other was a list of remembrances by Sally’s oldest son, Jonas, as he recalled his mother’s life. He was only nineteen when she died. Together they provide us with a small window with which to view a life and a community.

The Rev. Gad Newell was installed as pastor of the Nelson Congregational Church in 1794. He served for 47 years. While many members were added to the church during this period, Newell’s strict interpretation of the scriptures and moral conduct led members to bring complaints against each other for supposed trespasses resulting in public hearings and sometimes excommunication if confessions and requests for forgiveness were not forthcoming from the accused. Struthers states that a cloud of distrust among certain of its members hung over the congregation. Offenses included “not taking communion” and using “wicked expressions” while working on the highway.  Poor Mary Adams, who had 11 young children plus the baby daughter of her dead sister to care for, was also accused of using wicked expressions. While she confessed that she was sometimes unstrung, and it would seem for very good reasons, her excuse was not considered satisfactory. She was barred from receiving communion.

It might be inferred from this that the Rev. Gad Newell would find few in his congregation who could measure up to the standards he set, but Sally Melville won nothing but praise from him. He writes, “Very few persons have maintained, in every respect, so irreproachable a character and been so much sincerely respected by all classes, thro’ life. The tongue of slander could find nothing to gratify its malignance in her character. Taken away in the midst of her days and usefulness, irreparable was her loss to the family: great to the poor and needy; and to society, and to the interest of religion. The sick and distressed in the neighborhood experienced her kind sympathy and assistance.”  Sally was a woman who worked at keeping the social fabric of her community in good repair. 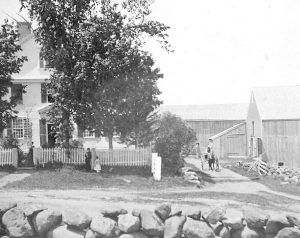 Melville House, later in the 1880s

Sally’s husband, Josiah, opened a large store across the road from their house about 1795 that attracted trade from miles around. It is probable that Sally helped at the store because Rev. Newell states that she was in a situation where she was well known and “she had the high respect of all that became acquainted with her.” He praises her intelligence and quick sensibility, her industrious and prudent management and her husband’s trust in her as an endeared and affectionate companion.

The Rev. Newell speaks of her dedication to her children as a “tender and discretely indulgent parent. She regarded with a very kind wakeful concern, the best interest of their bodies and their souls; their happiness for time and eternity.” When she knew she had not long to live, she gathered her children around her “to give them her dying counsel.” She and Josiah had four children, Jonas born in 1791, Lydia born in 1792, Josiah born in 1793 and Henry born in 1794.

It is in the recollections of Jonas that we learn of some of the more personal activities and personality of Sally as a mother and manager of a household. The opening pages written by Jonas begin with a family genealogy after which he penned the following lines:

“My mother when I was small took me with her when she visited her father in Concord.

Mother took me with her and visited Amos Child in the fall and apples ripe.

My mother reproved me for making too much noise when I rode to Gad Newell’s.

My mother rode to Marlborough when my eyes were sore to see a doctor. Nursed me for six months for sore eyes in the North room in the house and kept it dark.

My mother used the north east room in the house for to keep milk.

My mother occupied the North West room of the house for a sleeping room.

My mother was subject to fevers during her life time.

My mother used the South East room of the house for a parlor room and kept the clock and bureaus in it.

My mother used the South West room for spinning and weaving.

My mother took Sally Minot daughter of her brother after his death to bring up but died and left her with my father.

My mother in the back small kitchen had a small room to keep cheese and a sink room with a door to each.

My mother used frequently to work with sick people.

My mother used frequently to have a psalm tune sung called Flanders.

My mother used to receive her father at Packersfield.

My mother used to assemble her children around her to say our prayers and every Sunday to say the catechism to her out of the Primmer.

My mother used to keep the milk in the cellar and skim it there.

My mother used to keep the clock in the south east room and the desk remained there as long as she lived.

My mother used to receive long visits from her cousins.

My mother used to make a toast of bread and butter and water as the one she liked the best.

My mother used not to eat salt fat pork.

After the funeral of my mother I walked onto the top of John Osgoods highest land on his farm.”

Sally set an example that Jonas followed all of his life. He moved to Jaffrey in 1821 helping to organize the first bank in Jaffrey and became a respected banker. Jonas was very active in the town and church affairs, a leader in the temperance movement and the first signer of the constitution of the Anti-slavery Society.